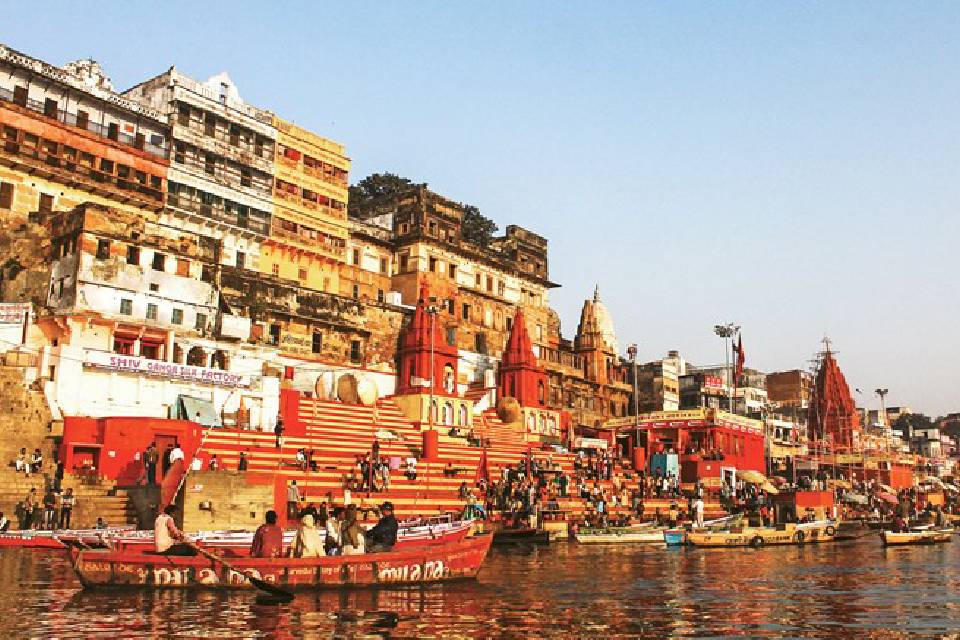 Just two days of sailing on the Ganga is enough to develop a magical bond with the boat, the two young boys steering it and the tranquil river. As you silently row past the ghats, the water seems to stretch away into infinity and you get to view up close the dichotomy of existence. Here the real and mythical, devout and non-devout, life and death, calm and chaos comfortably co-exist. You may have read books and articles on Varanasi’s history and culture and seen photographs and

The Ganga at dusk is equally fascinating. As the sky darkens, lights appear on the ghats, creating ripple on the grey water. Boats begin to briskly ferry people for the Ganga aarti at Dashashwamedh ghat, which draws huge crowds. Those who wish to witness it from the ghat need to be there at least two hours before. Others just watch from boats that are lined at the edge of the ghat. These days, aarti takes place at many ghats. It’s a beautifully choreographed ritual — priests clad in silk dhoti, kurta and angavastram, loud chanting, the clanging of cymbals, synchronised movement of multi-tiered blazing oil lamps and huge brass camphor lamps, colourful flowers and the aroma of dhoop and incense sticks.

The aarti over, crowds disperse and the boats begin to drift away from the ghats. In the stillness of the night, you just hear the swish and plop of the water as the low crescent moon cruises along with you.

“The ghats are where we sit, contemplate and share our thoughts with the river and, sometimes, with friends,” says Umesh Kabir, a sadhak at the Kabir Math in Varanasi. “It’s on the Panchganga Ghat that saint-poet Kabir met his guru Ramanandji and spoke of life’s truths on these stone steps through his dohas, informs Umesh, reciting a couplet, Kabir Man Nirmal Bhaya, Jaise Ganga Neer, Pache Pache Har Phire, Kahat Kabir Kabir (Kabir’s mind got cleansed like the Ganga water, now everyone follows him saying Kabir Kabir).films that document its spirit, but its energy and ethos need to be experienced.

It’s 5 a.m. Braving the sharp chill, men and women stand waist-deep in water, offering obeisance to the river to absolve their sins, some sit with the priests and puja paraphernalia to perform rituals, while three foreigners meditate in the Padmasana posture on a raised platform. Lata Mangeshkar’s bhajan ‘Jai Ram Rama Ramanam Sharanam’ echoes from a temple along with the sound of the bells on Gai ghat that has a big sculpture of cow. A group of sadhus in saffron with matted locks and ash smeared on their body walks along the Hanuman ghat. Little boys scream, splash and swim in the grimy water along the Bhonsale ghat. Women in bright-coloured saris sing in unison at Darbhanga as they leave diyas afloat. Flames and thick smoke rise from pyres as you near Manikarnika ghat that symbolises liberation from rebirth — moksha. The ghat is stocked with logs of wood around which stand grieving relatives. The grim reiterates the transience of things. More bodies are burning on Harishchandra Ghat. “Sirf yahan antim sanskar chaubis ghante kiya jata hai (the only place where cremation is performed 24 hours),” says Manish, slowing the boat. “Ganga Ma sabko paar lagati hain (she helps every soul),” he adds.

Plying the oars expertly, Manish tells me how his father also used to row devotees and tourists down the river. “I have grown up on the boat. This river is home to me. It upsets me to see her bear the brunt of increasing pollution. People come to purify themselves and leave her dirty. Yet, I cannot imagine living away from the Ganga,” he says. It’s hard to disagree with Manish; there is something about Varanasi, one of the oldest living cities in the world.

People from across the globe come here especially to watch the sunrise — as the little orange ball with yellow, red and brown rings around it emerges, the boats and humans appear like silhouettes and the water shines like a jewel, offering a surreal experience.

There are about 85 ghats in Varanasi that extend from Assi to Raj Ghat. They are much cleaner now, with conservancy workers constantly at work. It is a great experience to walk along the stretch to soak in the sounds and sights. The ghats have a spiritual significance for Hindus but they offer space for people of other religions to pray too. The Alamgir mosque on Panchaganga Ghat was built by Mughal emperor Aurangazeb. The Jain ghat has three temples, while Sarnath, 10 kilometres from Varanasi, is where Buddha delivered his first sermon on dharma. The river quietly trundles on, carrying human life in all its diversity.